I’ve been doing a lot of research online into alzheimers and came across this yesterday. I think there’s a lot of wisdom in it. So far Merry remembers us but she has family structure a bit jumbled. Sometimes Chris is her brother, sometimes she show’s us a picture of her mom but tells Chris it’s a photo of his mother. I think we’ll just “go with the flow” in future.

Merry has her good days and bad, as is to be expected. But as a really good aside, we have managed to reconnect Merrys brother Ed with her!

Getting to know Ed has been a blast – he and I chat for hours on the phone. The gift of gab is strong in the Tillitson family! Thank heavens the VA hooked him up with a phone that displays the text of the conversation because he’s so hard of hearing.

Saw this next bit online, I thought it was hysterical! But then, like Art Linkletter, I have always been fascinated by young childrens take on things – given what this boy knows his logical deduction is brilliant.

I shared it with Chris who laughed so hard I thought he’d cry… Zombies! Zombies!

And the latest political cartoons:

Jim Crow voting laws pass in many red states, aiming to make it harder for people of color to vote. Major League Baseball responded to Georgia’s egregious new law by moving the AllStars game out of Atlanta!

President Biden has now declared *all* Americans aged 16 and up can start getting vaccinated April 19th! 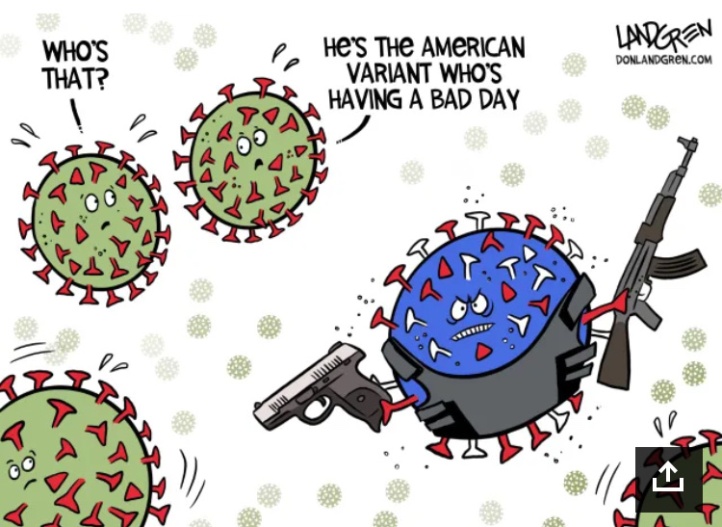 Let’s hope we can avoid this scenario, a variant caused by maskhole covidiots which can render the vaccines useless. Chris gets his first Fauci Ouchi tomorrow!